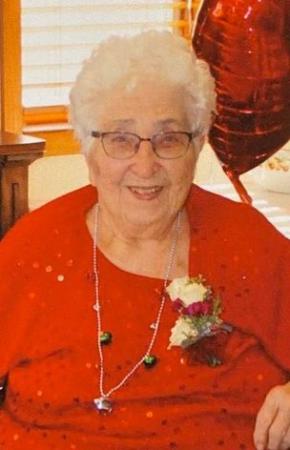 Barbara Jean (Klumpp) Templeman, age 94 passed away peacefully with family by her side on Saturday, October 29, 2022, at the Good Samaritan in Holstein, Iowa.

She was born December 15, 1927 to William Edward and Virginia Driscilla “Jennie” (Phelan) Klumpp in Aurelia, Iowa.  She grew up in the Aurelia area and attended the Aurelia Community School District and graduated from Aurelia High School in 1945.  She went to work at the Stafford Shop in Storm Lake, Iowa, where she met James Russell Templeman.

Barb married Jim on March 9, 1947 at the Methodist Church in Webb, Iowa.  They lived in Storm Lake for a short period of time and later moved to Estherville, Iowa, where two of there three sons were born.  Thomas was born in 1947 and Robert in 1951.  In 1953 they moved to the Templeman Family farm in Webb.  There in 1954 Gary was born.  Barb went to work at the Webb School as a cook.  She was a Cub Scout Den Leader for all of her sons.

In 1965 the family moved to Cherokee, Iowa.  They joined the St. Paul United Methodist Church.  Barb was a cook in the Cherokee School district until 1971, at which time she went to work at the Cherokee Hospital in the laundry department and later in the accounting department.  She retired in 1997 but continued to help if they needed any sewing or odd jobs done.  In the early 1970’s she joined the Afton Community Club and enjoyed their outings.  She helped at the local Blood Drives and had donated 18 gallons of blood.  She enjoyed her huge vegetable and flower gardens, feeding her cats and birds, mowing lawn, and preparing for the holidays.  She loved preparing a huge family feast for Thanksgiving and making candies and cookies for Christmas care packages.  She cherished her family and friends.

After Jim’s death in 1983, she stayed on the acreage.  She was always willing to help a friend.  When neighbor and friend, John Letsche, needed a place to stay and heal after surgery she gave him a bedroom to use until he was healed.  He never left.  They became regulars at the Polka Fests in Iowa, Nebraska, Minnesota, and South Dakota until his death in 2008.

Public visitation will begin at 3:00 p.m. Friday, with family present from 5:00-7:00 p.m. Friday night at the Greenwood-Schubert Funeral Home in Cherokee.