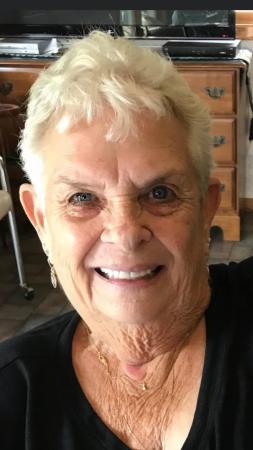 Edna Lorene Batten was born on July 25, 1944 at Iowa City, Iowa to Dorothy Stilts and Merton Pruitt.  She attended Cherokee Schools, graduating in 1962.  She married William Hoefler on April 4, 1964 at their home in Cherokee, Iowa.  Together Edna and Bill had one son, Chad, who was Edna’s whole world.

She worked for Woltman’s Real Estate and Bomgaars for many years before deciding to stay at home to raise her son.  Her husband Bill died on October 30, 1988.  Edna married Harvey Batten on November 26, 1994 at the Little Brown Church at Nashua, Iowa.   Harvey passed away on February 5, 2021.

Edna was a strong, caring, and honest woman.   Notorious for calling a spade, a spade, or calling it like she saw it, her words of wisdom and advice is something we all will miss.  Despite her heartbreaks, Edna had spunk and a zest for life. She was an avid gardener with a green thumb, who loved to be outside taking care of her property.  She shared her small harvests and food she canned with her friends and family.  She and Harvey had 17 glorious winters in Texas, keeping away from the cold weather and allowing them to see friends.  As much as she enjoyed Texas, Edna was happiest on the farm. She loved company and her door was always open for talks over coffee, watching for cardinals, or giving advice.  Edna cherished her family.  She treasured them and was always looking forward to the next time or activity she got to see them.

A Mass of Christian Burial will take place at 10:30 a.m. Saturday, March 26, 2022, at Immaculate Conception Catholic Church in Cherokee.

Public visitation will begin at 4:00 p.m. with the family present from 5:00-7:00 p.m. Friday night at the Greenwood-Schubert Funeral Home in Cherokee. There will be a 4:00 p.m. rosary and a 7:00 p.m. prayer service on Friday at the funeral home.