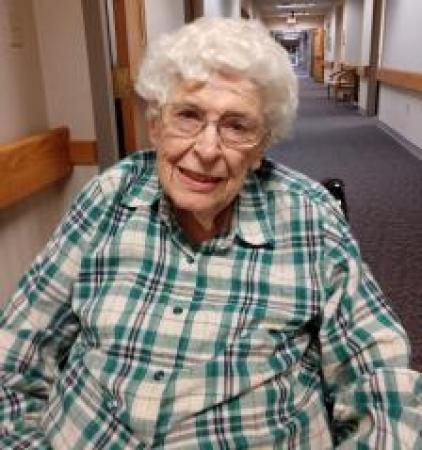 Imelda Margaret Rupp, the daughter of Bernard and Anna (Specht) Rupp, was born May 14, 1924 in Rock Township near Maryhill. She lived on the family farm her entire life, until moving to Cherokee to reside at the Beck Assisted Living, following the passing of her brother Adrian, in September of 2002.

Her childhood years were spent near Maryhill, where she attended school until the eighth grade. She then went to Quimby High School for one year. She had to discontinue her education because of poor health. She stayed on the farm helping with the work needed.

Imelda was a member of Visitation Church at Maryhill until the Parish was closed after the church was destroyed by a windstorm in 2006. She became a member of Immaculate Conception Church in Cherokee. She was an active member of the Maryhill Guild and worked with the decoration committee from when it started in 1971 until 2006.

Imelda was an amateur artist. She designed and made some banners for the church. She enjoyed painting pictures, reading, crocheting, sewing, embroidering, and growing flowers.

She is survived by many cousins.

A Mass of Christian Burial will take place at 10:30 a.m. Wednesday, December 21, 2022, at the Immaculate Conception Catholic Church in Cherokee.