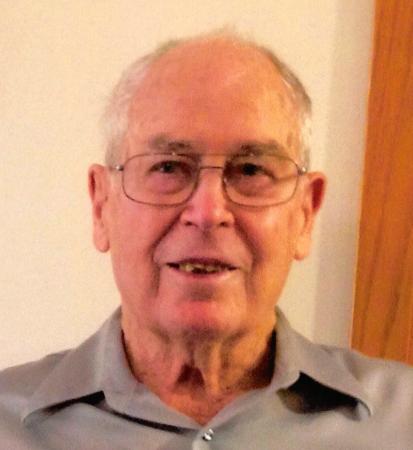 Ralph Paul Rupp was born April 29, 1926 in Cherokee, Iowa. His parents were George and Mary (Kohns) Rupp. He attended his early school years at Maryhill School, and later at the Quimby Schools. He proudly served in the U.S. Army during the Korean Conflict.  He was a member of the US occupation into Germany, specifically Nuremberg, Germany. He wanted it written that the day he was drafted was one of the best days of his life, as it was through his service days in Germany that he met “the love of my life”—his future wife, Herta Schaufler. They married January 31, 1953, and became parents of three children: Anna, Sharon and Brian.

Ralph was an active member in the Maryhill Church, and later became a member at Immaculate Conception. He received 3rd and 4th Degrees in the Knights of Columbus. He served as president of the Cherokee County Pork Producers for 2 years. His passion was farming, and he was active in soil conservation. He was among some of the first farmers in the area to use contour farming, as well as no-till farming. He was a 19-year colon cancer survivor and was grateful for every day. He enjoyed his coffee time with friends at The Family Table. His family knew him as someone who was fascinated with all kinds of gadgets, loved to laugh, and was ever the optimist. Ralph and Herta loved to travel, and were able to visit her homeland of Germany several times. In his travels, he was never “lost”, but was “taking the scenic route.”

Survivors include his daughter, Anna (Bruce) Schmadeke of Marcus, IA, and his son, Brian Rupp of rural Cherokee, IA; great-grandchildren, Jarren and Brenna Heitter and their father, Seth Heitter of Mt. Morris, IL; one brother, Floyd Rupp, as well as many nieces and nephews.

A Mass of Christian burial will be held at 10:30 a.m. on Wednesday, October 17th at Immaculate Conception Church in Cherokee.

HONORARY
All of Ralph's nieces and nephews

Visitation will be after 2:00 p.m. Tuesday at the Greenwood-Schubert Funeral Home. The Knights of Columbus will lead the rosary at 4:45 p.m., and the family will be present for visitation from 5:00 until 7:00. A prayer service will follow the visitation at 7:00 p.m.