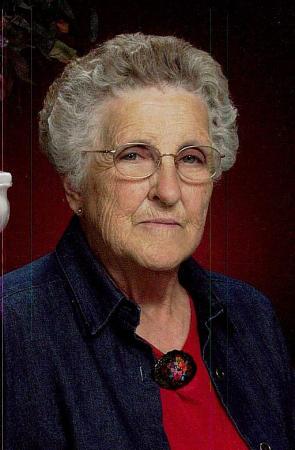 Ruth was born on March 20, 1923 in Cherokee, IA the daughter of Leander and Laurine (Madison) White. She and her family lived on a farm between Merrill and LeMars, IA, where Ruth attended country school. They lived in this home until she was 10 years old then they moved to Wisconsin.

Ruth graduated from Tomah high school - Tomah, WI in 1940. She returned to Iowa to work for her sister, Irma (Cave), as a housekeeper. Ruth began working at Sioux Valley Memorial Hospital (Cherokee) in 1945 and became interested in nursing. She attended St Joseph School of Nursing, in Sioux City, graduating as a Registered Nurse in September 1950. She returned to Sioux Valley Memorial Hospital working in the Surgery Department.

She met Louis Henry Hausmann and they married on May 8, 1952. She continued to work at the hospital until they had their first child. She remained as a stay-at-home mother until after having their fifth child.

In 1960 she started work at the Cherokee Mental Health Institute and completed 25 years of service retiring in 10/1/85.

She liked visiting with the family, cooking, cleaning, and enjoyed caring for her yard and gardens. Ruth loved her cats and dogs; they always had one of each. She was entertained by their playfulness and love for each other; she took care of them like little children. They took many vacations to their favorite locations in the Black Hills including Yellowstone. She always commented about the beautiful colors found in nature, and all of God’s creatures.

After retirement, Ruth and Lou traveled many winters to Florida to visit son Alan (and wife Sharen). She also traveled to Germany to visit daughter Gina and family. They attended the kids and grandkids school events: t-ball, volleyball, basketball and baseball. She volunteered with the Villa Auxiliary for a number of years. Her last years were enjoyed spending time with children and visiting families.

Ruth lived at the Gardens for six years until she broke her hip around December 2017.  She spent the past two years in the Cherokee Villa, and the Accura of Aurelia.

Their 2 children: Hallie and Abby

His daughter: Holly and her son Jameel

Their 3 children: Gabrielle, Garret, and Gorden