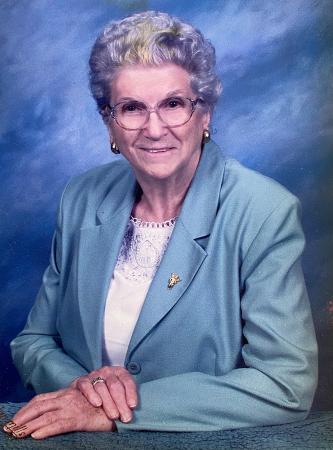 She attended Marcus public school from kindergarten and graduated from the class of 1942 with a rural schoolteacher certificate due to a shortage of teachers due to WWII. She began teaching in the fall of 1942 until 1944.

Thelma joined the Holy Name Church in December, 1943, a faithful member. She then married Cletus C. Gravenish on May 23, 1944. She joined him at Olathe Naval Air Station, Olathe KS and was employed on the base. In 1945, they began farming in Tilden Township and continued until moving into Marcus in 1968.

Besides teaching school, she did general office work, ran two cafes, worked for 17 years at the Mental Health Institute in Cherokee, a reporter and writer of the “Via My Grapevines” and “Files of the Past” for the Marcus News until 2006.

Thelma was active in Holy Name Guild and Catholic Daughters of America, taught CCD classes from the 1950’s into the 1990’s. She served on the church board remodeling committee.

She enjoyed being able to travel to California, Hawaii and Ireland with family members as well as on the bank group tours. Enjoyed playing pinochle and bowling until her knees got bad. She was a supporter of the construction of the Heartland Care Center in 1994. Thelma entered the care center in March 2012 after a fall followed by surgery.  She received above and beyond excellent and empathetic care from the staff.

of Montrose, CO, and Lisa (Mike) Habben of Le Mars, and son-in-law Steve Specht of Cleghorn. She has 23 grandchildren, two step grandchildren, 38 great grandchildren and 2 great great-grandchildren. She was also survived by a sister Mary Ellen Gravenish-Blair of Meriden and a sister-in-law Rhoda Bork of Paynesville, MN.

She was preceded in death by her parents, her husband Cletus in 1984, son Frany in 1986, son-in-law Bob Manning in 2020, and daughter Rosie in 2020, her sisters Katherine Chase, Natalie Harman, Mildred Erickson, Eleanor Case and brothers Ned L. Bork Jr., and Lloyd Bork.

Visitation with family present will be held from 5:00-7:00 p.m. Wednesday night at Holy Name Catholic Church in Marcus, IA. There will be a 7:00 p.m. prayer service following visitation at the church.